From shoe box apartment to $2m property in 12 months

Sean moved to New Zealand from South Africa in 2011, then bought a shoe box apartment in 2013 after trusting an opinion from someone close to him, attracted to the rental yield it would bring and what was thought to be safe bet to invest his money without needing a mortgage.

After meeting Mio who moved to New Zealand from Japan in 2013, they moved in to the apartment together and lived there for two years, during that time Mio was a driving force for them to find a way to build wealth to secure their future through investing and discovered Lucia’s 1-day property workshop.

After attending the workshop, they realised how the apartment was a poor investment, holding them back from achieving their goals.

Lucia gave them the hard truth that despite having held the property for seven years, they would have to sell and start again. It took months to sell and made no capital gain, Sean’s message is clear for anyone property hunting: 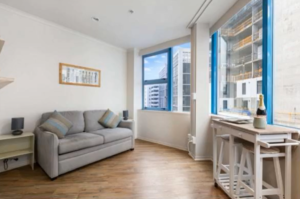 The shoe box apartment – the entire living space in one room with a sofa bed.

Finding a property in a hot Auckland market

Sean and Mio began searching for their next property purchase in late 2020, utilising all the knowledge they’d gained from taking part in the members only Property Investment MasterClass to identify quality properties. Their plan was to find a property where the land can be developed and the existing house would have potential to add value, to enable them to grow a high value portfolio quickly.

After a couple of months of no success at auctions as the Auckland market was heating up, they met Finax’s property coach, ex real estate agent and renovation specialist, Chris Hu at a member only networking event, who helped them secure a property.

“Prices were going absolutely crazy… Genuinely a lifesaver working with Chris, she went way beyond to help us.

The hammer went down while I was sitting in my work carpark on the phone with Chris who was in the auction room… and Mio watching online asking ‘was that us who won?!” 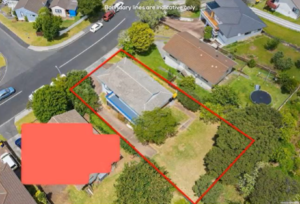 Sean and Mio purchased this West Auckland property for $1.1m in January 2021

Sean and Mio secured their West Auckland property for $1.1m in January 2021, they ensured they were as prepared for their property strategy as possible before settling, so they could hit the ground running on their project as soon as they took ownership.

They arranged for a long settlement and an allowance for extra access to the property during that period, so they could prepare for renovations and get a head start on what was required for the new construction.

Once they took ownership they immediately began work on the renovation to the house and thanks to having access to great industry contacts, no building consent work was required, saving time and money. 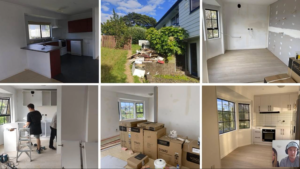 Meanwhile, they worked with a trusted design and build company to get the ball rolling on the duplex that will increase their rental return by approximately $1,300+ per week and once completed, will increase the overall property value over $2m.

Concept design for the new build

Sean and Mio discovered that there is so much to learn around property, seeking advice from those who understand property investment in the market your looking in and doing due diligence is key to minimise mistakes. Things may never go as smoothly as planned, but taking action is key to success.

“Right in the beginning I was asking the same questions 3-4 times over, ‘is this the right one? Are we doing the right thing?’ Lucia said ‘why are you holding back? Trust in your decision and go run with it’. As you move through it and start making these decisions you realise that you either make the decision or you miss out. Make the decision, be confident in what you’re doing and then deal with what comes, when it comes, because it’s never going to be perfect, but it all works out. Be confident, and a have a good team.”

To learn more about Sean and Mio’s property journey, CLICK HERE check out the recording of their recent webinar.