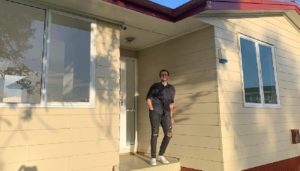 Having bought his first home at the age of 23, an Auckland man says a combination of good timing, research and confidence helped to get his offer accepted.

For Auckland-based loan writer Keelan Clark, buying a first home wasn’t a matter of if, but when. At 14, he started working part-time. Encouraged by his parents, who worked as bankers, he started saving and investing from an early age.

After two years of searching, and reviewing documents for over 170 houses, in September, Clark became the owner of a three-bedroom home in Mangere. He paid just over $800,000.

In June, Clark noticed the house, which was for sale by negotiation sitting on the market. The real estate agent told him a week earlier, the seller had turned down an offer close to $900,000.

Having done his research, Clark made a snap decision to put an offer in on the spot. It was conditional on him viewing the house and getting finance approved, as his lender did not provide a blanket pre-approval.

“I knew if I couldn’t get the loan, I could pull out and if I went and saw the house and it was full of holes, I could say it wasn’t to my satisfaction,” Clark told Newshub.

Researching what similar houses in the area were selling for allowed him to back up his offer with examples. He also mentioned the work required to bring the house up to scratch.

“I knew what the house was worth and where everything else in the area was selling… when he [the agent] was trying to ask for so much more, I just said ‘look, the house isn’t worth that at the moment so unfortunately I can’t go any higher’,” Clark explained.

Doing the research gave him confidence, which Clark believes showed the agent and seller he was a credible buyer.

“A first-home buyer who is confident, knows what they’re doing, has done the research and they know the area… (similar to investors), they’re going to want to engage with them because they know they’ve got their money sorted,” Clark said.

Through the negotiation process, he increased his initial offer by around $20,000. It wasn’t enough to get his offer accepted, but he knew the seller had a deadline.

“I said if you change your mind, I’ll keep my offer open until [the next day]… the agent called me back the next morning,” Clark added.

Looking ahead, rising interest rates, tightened loan-to-value ratio restrictions, tougher credit conditions and declining affordability are expected to have an effect on demand.

Less competition for houses may lead to fairer prices, Sir John Key telling Newshub early in November house prices have “run their race”  for a while.